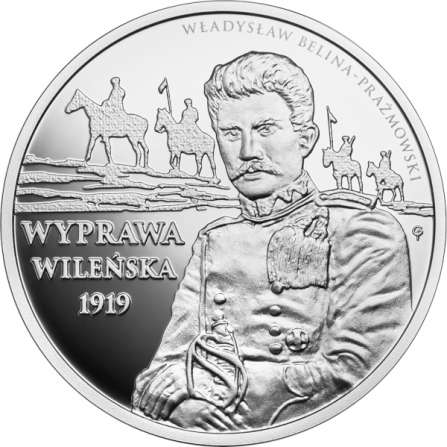 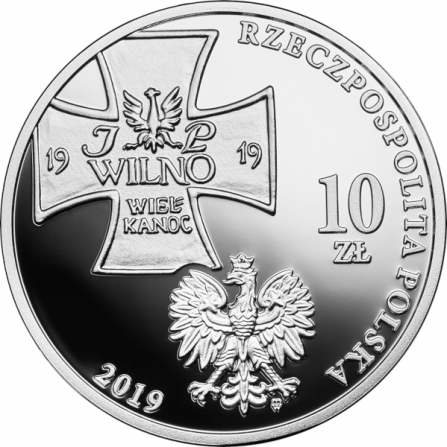 Subject: no
Face value: 10 pln
Alloy: 925/1000 Ag
Diameter: 32 mm
Weight: 14.14 g
Finish: proof
Mintage: 13000 pcs
On the edge: smooth
Additional: no
Date of issue: 2019-03-21
Issue price: 120 pln
The reverse of the coin features an image of Lieutenant Colonel Władysław Belina-Prażmowski, dubbed the first uhlan of the Second Republic of Poland, against the background of the cavalry marching to Vilnius. He was a legionnaire and the organiser and commander of the 1st Uhlan Regiment of the Polish Legions; he organised the 1st Cavalry Brigade in independent Poland, which he commanded in the years 1919−1920. In the autumn of 1920, he left the army at his own request. In the years 1931−1933, he was the Mayor of Cracow, and then the Voivode of the Lvov Province until 1938.

Designer: Grzegorz Pfeifer
The obverse carries an image of a military commemorative badge awarded to the participants of the Vilnius expedition in the interwar period. 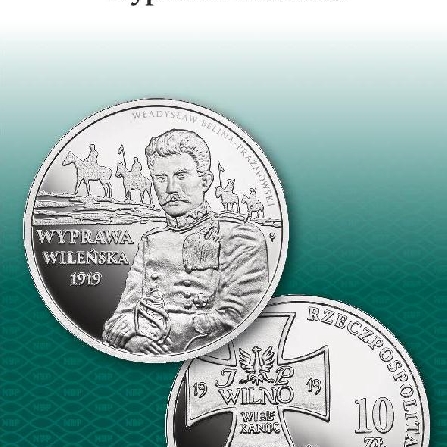 The Vilnius operation was planned and launched by Józef Piłsudski in April 1919 contrary to the opinion held by the Polish and French military staff, who foretold its failure. The Commander-in- Chief hoped to forestall the expected offensive by the Bolsheviks, who were concentrating their troops beyond the Neman to hit the Polish state, which was only just organising itself, and to transform it into a soviet republic.

Part of the Polish forces attacked Navahrudak, Baranavichy, and Lida, thus catching the attention of the enemy. Under their cover, a group made up of a cavalry brigade commanded by Lieutenant Colonel Władysław Belina-Prażmowski and several infantry battalions led by General Edward RydzŚmigły advanced on Vilnius on 16 April. ...