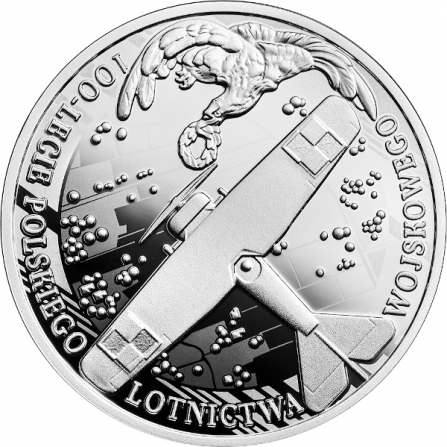 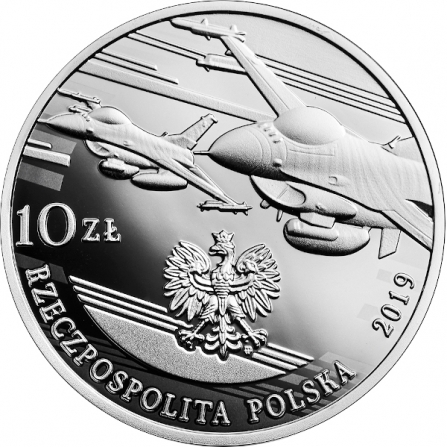 Subject: no
Face value: 10 pln
Alloy: 925/1000 Ag
Diameter: 32 mm
Weight: 14.14 g
Finish: proof
Mintage: 15000 pcs
On the edge: smooth
Additional: no
Date of issue: 2019-12-12
Issue price: 120 pln
The reverse of the coin refers to the origins of Polish military aviation. It features the silhouette of the fighter plane Fokker E.V (D.VIII) that Polish pilots flew in the fighting against the Ukrainians for Lvov and on the Southern Front in 1918. On its wings the plane bears large white-and-red chequerboards – the national marking of the Polish military aviation adopted in 1918. Above it there is a military pilot’s badge (called “gapa”), designed by Prof. Władysław Gruberski and introduced in 1919, representing an eagle in flight carrying a laurel wreath in its beak. The whole image is placed against the background of a grid of fields, characteristic of Polish landscape, as seen from above.

Designer: Robert Kotowicz
The obverse of the coin, referring to the contemporary Polish military aviation, features the silhouettes of two F-16 planes in flight. 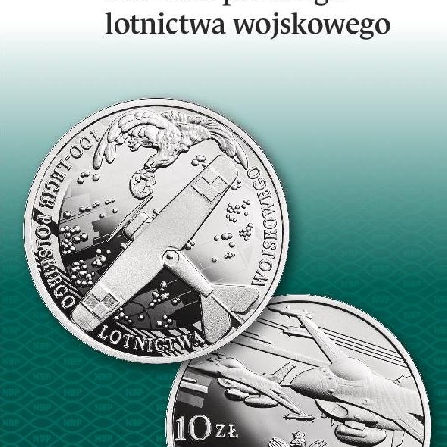 When World War I ended in 1918, the independent Polish state was re-emerging following 123 years of partitions. This development was accompanied by the formation of national armed forces and military aviation. The defeat of the Austrian and German empires on the fronts of the Great War weakened their control over the Polish territory. This enabled the Poles to take over a number of major enemy airfields, where they captured a certain number of aircraft. Moreover, the emerging air force included airmen who had received pilot and observer training in the Austrian and German air forces.

Since its very beginning, the Polish air force joined in the fight to keep the newly regained independence. It is assumed that the first combat flight was already carried out on ...