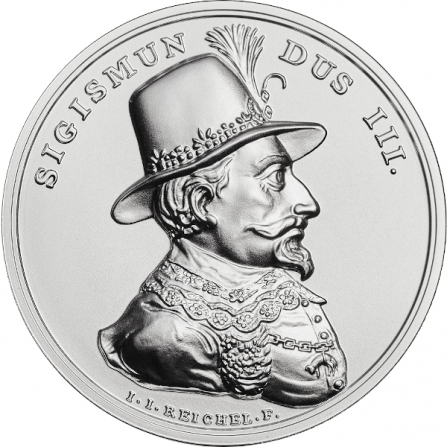 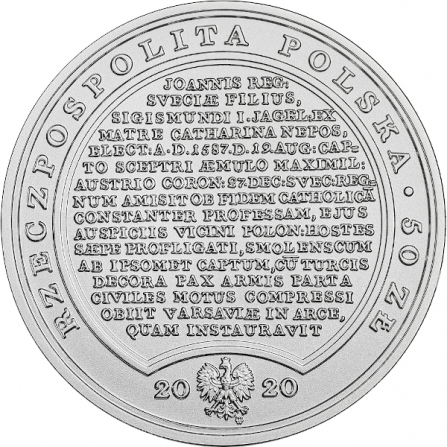 Subject: Treasures of King Stanislaw August
Face value: 50 pln
Alloy: 999/1000 Ag
Diameter: 45 mm
Weight: 62.2 g
Finish: standard
Mintage: 5000 pcs
On the edge: SKARBY STANISŁAWA AUGUSTA * ZYGMUNT III WAZA *
Additional: no
Date of issue: 2020-01-23
Issue price: 720 pln
The reverse of the coin features the bust of the king transferred from a medal (according to a painting by Marcello Bacciarelli) with the profile facing right, with a mustache and a small beard, in a high hat with a jewelled feather brooch, in a large lace collar, wearing a caftan with studs and an embroidered coat, and with the Order of the Golden Fleece on a chain.

Designer: Anna Wątróbska-Wdowiarska
The obverse of the coin carries a slightly shortened version of the text from the reverse of the medal (in translation): The son of the Swedish King John, the grandson of Sigismund the Elder by his mother Catherine, elected on the 19th day of August Anno Domini 1587, having captured Maximilian of Austria, his rival to the throne, and crowned on the 27th day of December, he forfeited the Swedish kingdom because of his adherence to the Catholic faith. During his reign, Poland’s neighbouring enemies were vanquished many a time, Smoleńsk was seized by the king’s army, a commendable peace treaty was signed with the Turks and civil wars were suppressed. He died in Warsaw, at the castle he had renovated, on the 30th day of April Anno Domini 1632, at the age of 66, in the 45th year of his reign. 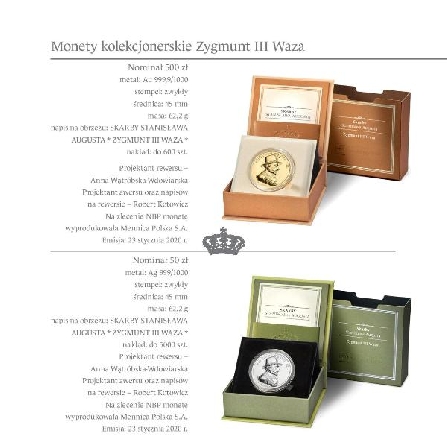 The reverse of the coin features the bust of the king transferred ...