100th Anniversary of the Port of Gdynia 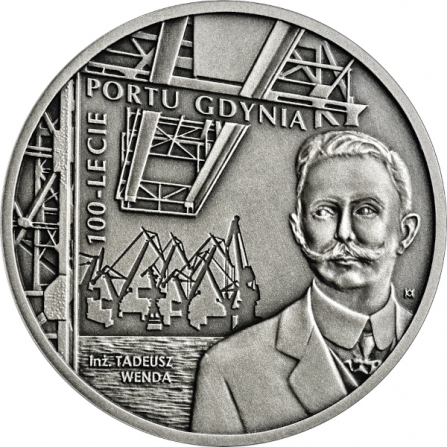 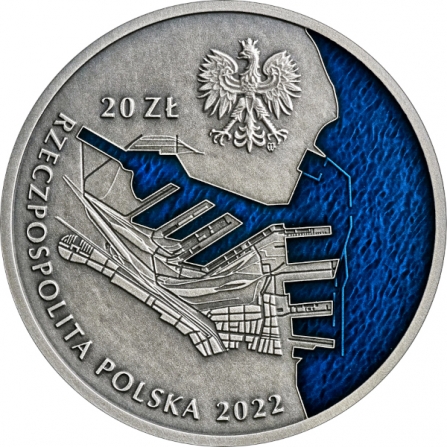 Subject: no
Face value: 20 pln
Alloy: 925/1000 Ag
Diameter: 38.61 mm
Weight: 28.28 g
Finish: standard
Mintage: 12000 pcs
On the edge: smooth
Additional: transparent resin, oxidized
Date of issue: 2022-09-14
Issue price: 290 pln
The reverse shows the bust of Tadeusz Wenda reproduced from portrait photographs taken in 1918, which are deposited in the collection of the Gdynia City Museum. The fragments of the portal of the openwork gantry crane shown in the foreground were used in Wenda’s times and are still in use today. The cranes in the background are contemporary devices. At the port, the past blends with the present.

Designer: Dominika Karpińska-Kopiec
The obverse of the 20 złoty coin depicts a plan of the port of Gdynia. The plan in the form of a coloured photocopy from the collection of the Gdynia City Museum, made by Leon Wilbik on the basis of Tadeusz Wenda’s design, was used as a model. The plan was probably drawn up around 1936. It shows the status of the port in that year as well as the Industrial Canal (which was ultimately never built), some of the port warehouses as well as embankments and basins which were planned for construction in the subsequent years. 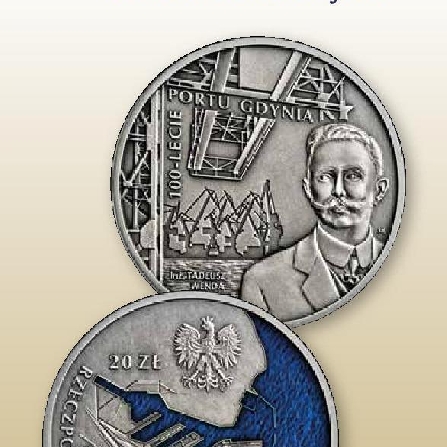 Under the Treaty of Versailles, Poland was granted a narrow strip of coastline (about 140 km including the Hel Peninsula) and the right to use the port of Gdańsk. In practice, however, due to the special status of Gdańsk as a free city, it was not fully possible to use the existing port for the military and commercial needs of Poland. In 1920, a few months after Poland’s Wedding to the Sea, the Ministry of Military Affairs commissioned engineer Tadeusz Wenda to designate a convenient location for the construction of the future port.

In June 1920, Tadeusz Wenda submitted a report on the inspection and observation of the Coast. The convenient location of Gdynia, providing, among others, the protection from winds by the Hel Peninsula, sufficient ...