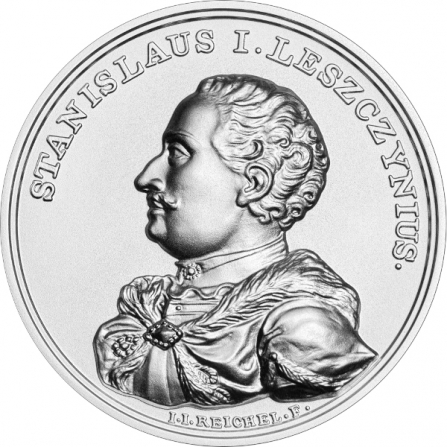 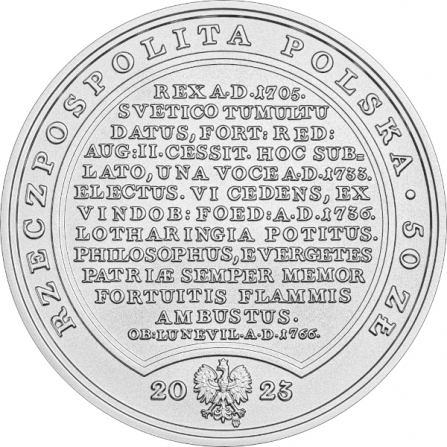 Subject: Treasures of King Stanislaw August
Face value: 50 pln
Alloy: 999/1000 Ag
Diameter: 45 mm
Weight: 62.2 g
Finish: standard
Mintage: 6000 pcs
On the edge: SKARBY STANISŁAWA AUGUSTA * AUGUST II MOCNY *
Additional: no
Date of issue: 2023-01-26
Issue price: 850 pln
The reverse of the coin features a bust of the king, transferred from the medal (probably according to a painting by Jan Bogumił Plersch), with the profi le facing left , with short hair pulled back, with a moustache, wearing a cuirass and a coat with a fur collar fastened with a clasp.

Designer: Anna Wątróbska-Wdowiarska
On the obverse of the coin, the text from the reverse of the medal (in translation) reads: The King, raised to the throne during the Swedish riots Anno Domini 1705, gave way to the power of the returning Augustus II. Aft er the death of Augustus II, unanimously elected Anno Domini 1733. Giving in to violence, on the basis of the Treaty of Vienna Anno Domini 1736, he took possession of Lorraine. A philosopher, benefactor, always mindful of his homeland, burnt by accidental fl ames, he died in Lunéville on 23 February Anno Domini 1766, at the age of 89. 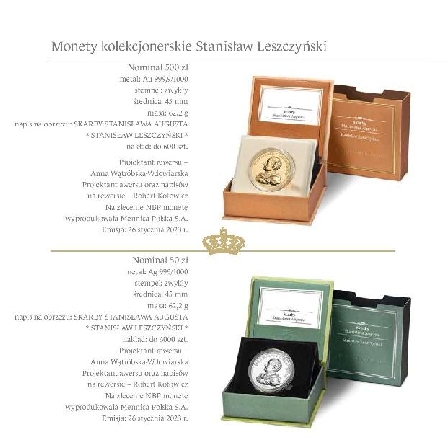 The twenty second coin of the series depicts Stanisław Leszczyński (1677–1766), who twice ascended to the Polish throne, and spent the last 30 years of his long life as Duke of Lorraine and Bar. Aft er the outbreak of the Great Northern War, when Augustus II the Strong renounced the Polish crown on 12 July 1704, Stanisław was elected king by the will of the Polish nobility and the Swedish king and crowned on 4 October 1705. Aft er the defeat of the Swedes at Poltava in 1709, he was forced to emigrate and Augustus II the Strong returned to the Polish throne. Aft er his death, in 1733, a double election was held in Warsaw. On 12 September, during the fi rst of them, Stanisław was elected king with the support of France, and on 5 October Augustus III was elected ...